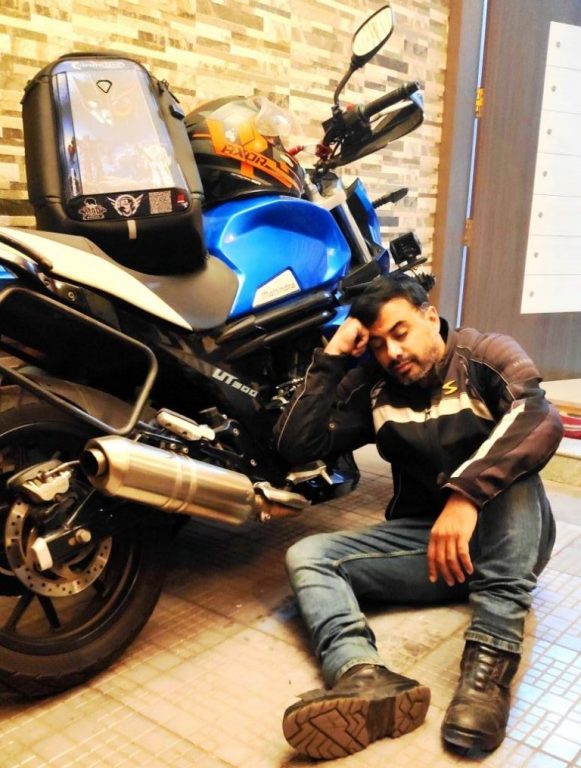 It’s the second day of the lockdown and waking up to a quite weekday with birds chirping in the summer breeze is a myth, now turned reality. The ongoing pandemic has brought the so called “social machinery” to a grinding halt. Everyone has been asked to practice social distancing in order to curb the spread of the virus. Some of us has taken this seriously some have thrown caution to the wind.

Those of us who have taken this seriously understand it this way – live today ride another day. Indeed motorcyclists amongst others take the road less travelled and ones where danger joins them for a cup of tea once in a while. But then again nothing beats an idiot trying to budge through traffic adding to the chaos, does it? The current situation is as realistic as any sci-fi flicks on similar themes sans the “mutation”(thankfully!). Social distancing – being backward compatible is what can help us get through the lockdown.

Let us understand this in motorcycling terms, however let’s first look at the phrase “backward compatible” first. Backward compatible – simply put is the ability of software to work with older version of hardware and the like. Opening an MS office Word 2007 document in the current version of Microsoft Office. In the motorcycling world there are technology support functions that earlier requires skill of the motorcyclist to execute. A simple and relatable act of stopping the motorcycle. Earlier the braking efficiency depended upon the motorcyclists reflexes against the road conditions and other variables. Today thanks to ABS some part of that is handled by technology, taking off some part of the burden. Some motorcyclists can switch efficiently between tech and non-tech machines almost instantly some not as much.

The motorcycle is parked, the gear is stowed away now what?

Most of the population is working from home. Those whose main work relied on the businesses that are shut for them it’s a long vacation. Given the fact that one needs to work more in times like festivals and national or state holidays for people in these sectors it’s a breather, in a way. For the rest who have a computer is work from the pajamas so as to say. The workaholics typically will sail through this while they make up on lost sleep sans the travel time. For the rest will its them and their trusted alarms. Yes, some of you reading this are with your families and they are glad to have you home while you engage yourself over home brewed tea at eleven am.

The last decade brought the world from Led monitors to tablets. The first ever encounter I had with one was about two decades back and not too long ago, a complex design was built ground up over a coffee! Today one can carry a DESKTOP worth of computing power in the palm of one’s hand. Adding to this is the internet boom. In five years India went from just out of 2g to entering 5G internet speeds. A once corporate only high speed fiber optic line has made its way into most of our homes.

A once sought after social media platform by youngsters is now considered an access point for the elders. From Instagram to YouTube there is a plethora of influential talent floating around whose activity personal and business revolved around “content”. But is you can’t step out your avenues for content is at least 90% lesser. Those who are adept to “going out” now need to adapt to staying in. Yes, just like locking your motorcycling in the garage when you go out on a long vacation sans the bike. Unsocializing is like unlearning everything from college degree backwards!!

Social distancing – Being backward compatible in these times is to have a state of mind that existed in the pre-cellular phone era. The direct beneficiaries here and the loners and introverts because they really do not care about the world, since they are lost in their own world. Those who have already been in positions that allow them to work from home are already at a head start. A walk in the park or society or to the grocery store for them is a breather enough.

For the rest here is what this entails. The pre-cellular phone era was a time when satellite television just entered, some newspaper publications were getting a makeover and local calls required the one rupee coin or access to a landline at home. Thus with limit resources then we had a more room to manage boredom. It’s surprising that like the west, India too has counseling to help individuals cope up with “boredom” which has been given rather fancy terms.

For everything else there are the news channels. Television has been a go to place to kill boredom and it’s been a boon. Unlike time when I received calls on the remote and attempted to change the channel with my mobile and I wonder if that had anything to do with the invention of smartphones. Once in a while I do find time for an abrupt nap which is a new form of time pass for me! It’s been about thirty six hours since I’ve stepped out of my building and this is not my first time.

At times I’ve spent a couple of days without the need to step out of the door let lone going outside the premises. The Smartphone now runs a two time cycle in twenty four hours or a third cycle in case am expecting a electricity shutdown situation. And no am still not netflixing around as yet. Ideally this is a good time to give yourself an opportunity to hear yourself think. Probably the last few months of staying disconnected is helping me get along without much stress. Or it’s just me.

Here are some pointers to being backward compatible:

WHY A MAN SHOULD READ – BY ANINDA SARDAR