Sharmishta Chakravorty the first two words that introduced us formally (read “on print“) to this riding group spoke about her designation as a Senior Manager with one of the corporate houses. Take away that morning cup of tea and you as dead as a dead duck. Reading on further, it said that this is  what she does during the week. And over weekend is the Director, The Musafirs Motorcycle Tours Pvt Ltd. an Archimedes genius in my head popped up a name – “SHONA” woman behind The Musafirs Safar. 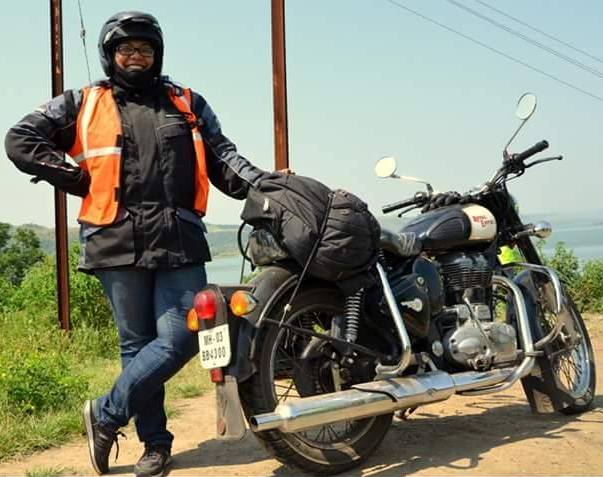 If you are a first time reader to the Genesis  section of Motolethe, unlike most others that do a biography, this is more autobiographical in nature. Our team met with Musafirs for the 1st time at a Road safety even last year in Pune. Both parties being bikers it didn’t take time for a friendship spark to light up a fire of curiosity to fuel this write-up. By and far in our observation we have seen that the members of Musafirs are more like a bunch of close-knit friends. They may not not have blood ties but a bonding stronger than that – FAMILY. It indeed is a rare sight to see a scooterette riding among gasoline guzzlers and pocket rockets with all riders clad in basic safety gear.

On of one these rides we asked Shona to tell us more about her family –  The Musafirs. In her voice, this is their story

“I am a biker and I love to explore the unexplored. It all started in December 2010 for me on one of the bike rides I had been to… And since then there has been no looking back. At that time, Mumbai did not have any mixed-manufacturer biking clubs. The ones that existed were the brand loyal ones. That is when I formed a biking club by the name of ‘The Musafirs’ the same month. I then reached out to like-minded motorcycling enthusiasts to join the gang because the more people, the more fun.”

The Musafirs was formed in December 2010 with the intention of providing a platform for motorcycling enthusiasts to break free from their routine work-oriented lifestyle. With the sole idea to indulge in the joys, thrills and the liberating feeling that long-distance motorcycling has to offer. Keeping this in mind, we did not want to impose any restrictions on the make of bikes that join the family. This is because we were promoting the joy of motorcycling and not promoting any particular brand. Especially, not promoting shoddily built motorcycles known to leak oil which people call ‘Marking its territory’.

Shifting in to first gear

Our first ride in January 2011 saw just around 15 motorcycles and we have come a long way since then. Today, the family has around 500 members – but this has not happened overnight.  Indeed a steady climb, since inception, we have ensured that we do at least one ride every month. Come rain or storm every Musafir keenly awaits the next ride. It has become a part of our lives because on the days of the rides, we do what we love doing the most – riding to far away destinations, miles away from the daily grind.

However, not everyone who joins us on their first ride makes it into the family. Every first timer is assessed to ensure that their wavelength matches with other fellow Musafirs. This is because we do not want ego clashes or demonstration of superiority on our rides:

When on the ride, every rider is a fellow Musafir. Someone who will watch your back when on the ride. Will pick you off the tarmac if you happen to have a fall. Over the years, the Musafirs evolved into a tight-knit family that readily accepts like-minded motorcycling enthusiasts. In times of joy as well as in difficult times, the Musafirs are there for each other. This feeling of family is what keeps the family ticking. Not only on the ride but the family also connects off the rides.

In The Musafirs safar, well maintained bikes that can do long stretches are favored. Doing long stretches is not as much dependent on the bike as much as it is dependent on the mindset of the rider. Cruisers and tourers with almost upright riding position rule the roost when it comes to our community. This is because at times, especially on rides longer than 700-800 kms one way, we do 250-300 kms non-stop. I remember on one of our rides, we started from Mumbai and our first halt was at Dhule. 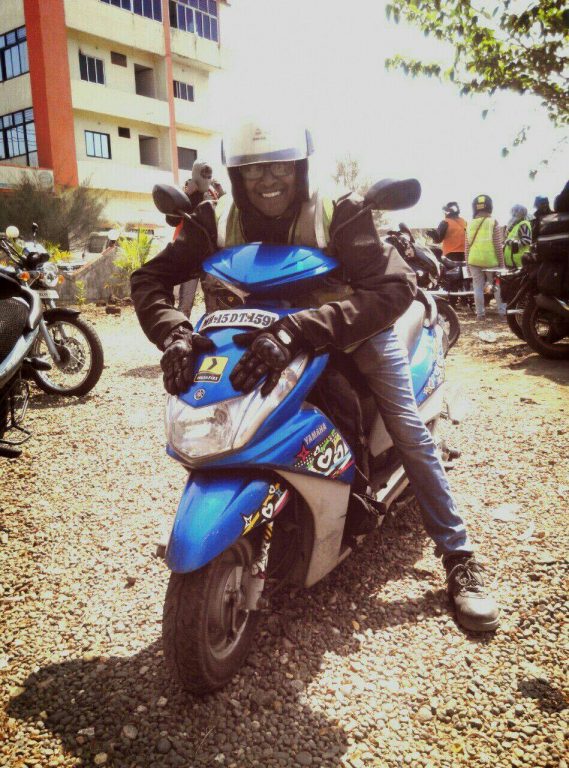 The Musafirs Safar – As Safe as it gets

The motorcycle manufacturing industry is on a steep incline with many new manufacturers entering the market. Either through joint ventures/technology sharing or as a completely new setup. By providing features like ABS, rear discs, stickier tires, auto-engine shut off beyond specific speed, many manufacturers are increasing the safety quotient.

However, in terms of whether safety measure are being adopted by motorcycle touring companies and motorcycle clubs, the answer is different.

In May 2011, the Musafirs became the first motorcycle community in the region to give reflective vests to all its riders.

This move was based on the fact that at times, when motorcyclists ride after dark, the mere light from a motorcycle’s tail lamp is not adequate to be spotted. Thus, the reflective vests enhance visibility. Even during the day, it gives us a means to identify our members when on the road. This trend has caught up with the entire motorcycling community. We now see quite a few riding groups following our footsteps and giving away reflective vests to riders.

‘Every rider should wear a helmet. Helmets are not necessary for pillions.’ WOW! It made me think, are pillions born with iron skulls?

In the past, I’ve seen pictures of riding formations in which people are riding in shorts and floaters. It makes me utter only 3 words – God Bless Them! A few first timers who have joined our rides too have shown up in shorts and floaters. Oblivious of the damage that can be caused in event of a fall. Such riders are made aware of the risks involved and from the next ride they show up in complete gear. Ideally the club admin/moderator who should take up the cause of safety for each of its bikers. They should be well aware of the extent to which things can go wrong and prepare their bunch of riders accordingly.

While on the road, we have experienced accidents so bad that had the rider not been in proper biking gear, the story would have been completely different. Right from the first Musafirs ride we have had zero tolerance to riders participating without helmets, shoes etc.

Biking clubs should be absolutely besharam and adopt the ‘best-practices’ seen in other clubs – they should not feel inferior about doing so.

We have observed an upward growth trend in motorcycle touring. Motorcycling is not the NEXT big thing. IT IS THE CURRENT BIG THING! Gone are the days when every long-distance motorcycling enthusiast in India would only talk only about the RDs, REs, Yezdi’s etc. With the entry of technologically advanced and more reliable motorcycles in the Indian market, and an increase in average disposable income of people in the 25 – 45 age segment, the number of motorcycling enthusiasts who can indulge in and sustain this hobby over a long period has gone up.

The future of motorcycle touring:

The motorcycle industry and motorcycle touring is set to climb new pinnacles of popularity. Also, the Indian market is showing keen interest in new technologies being adopted in the two wheeler segment. As the industry deepens it’s connect with the youth, more youngsters taking up biking as a hobby. We would like to see more initiatives being taken by motorcycle brands to promote the culture of motorcycling in Mumbai and also across the country.

Before the Musafirs happened, I had a routine life and routine work. Over a period of time, I realized that I was not doing justice to my existence and that resulted in the craving for ‘MORE’. The difference between then and now is that even though I have a full time job. The monotony doesn’t set in… I look forward to spending my weekends on the road with my bike, and with the members of the Musafirs clan. In the early days of The Musafirs I realized that travel can teach us a lot.

While a few places are hostile, the others are very accommodating. On one of the rides to a small town about 350 kms from Mumbai I remember that we woke up a mechanic at around midnight to fix one of our bikes. He not only did that, he offered us piping hot tea and food while he was busy repairing the vehicle. People, culture, experiences are different everywhere. The more one travels, the more one connects with oneself. But then the question, why on a motorcycle and not on any other means of transport? Because when I ride, I am with myself. I can dig deep within… It is a state of meditation… Yes it also provides a sense of HIGH!

The Musafirs Safar – The story so far

I have led over 50 motorcycle expeditions for the Musafirs. If we get down to mentioning each of them, it will be a long list. To summarize it, we have covered all the known places in Maharashtra. We have also frequently ventured out to places in the neighboring states including Goa, Karnataka, Gujarat. We have also motorcycled to the northern states of Jammu & Kashmir and Himachal Pradesh.

The Musafirs Safar – Destination is where the heart goes!

Every destination is unique and whether or not one likes it depends on ones frame of mind. For me what sets apart a destination is the route to reach there. Let us take the example of the Ladakh region… I would say that ‘Leh’ is an over-hyped destination. Once upon a time it was only the adventurers who would venture there because LEH was only accessible via roads… bad roads. However today, you have every second person’s aunts, uncles and grandpa’s visiting that place…

Is LEH my favorite destination? No… but the road to reach there on my motorcycle is my favorite… because every kilometer is a challenge that I have to overcome… be it wading through the gushing streams of water with icy cold water entering my boots or be it riding on black ice and the bike skidding over every 5 meters. It makes me push my limits… It makes me develop a deeper connect with myself… It makes me feel alive!

Before I enter my grave, I want to explore as much as possible… This year we would also be exploring Thailand on bikes. We will be heading to the North East of India and Bhutan later this year. Are these my dream destinations? Yes… until I ride there…